The story begins at the 2014 US Custom Harvesters Convention. For the last few years I have given away certificates for the USCHI benefit auction. The certificate entitles the winning bidder a set of models to look like what they use and Dolechek Harvesting won the auction. The 1/64 Dolechek Custom Harvesting Models presented a bit of a challenge for me. Dane’s truck is a flat top 387, something I have never built or worked with before. Plus, the base truck, a Die Cast Promotions 387 is one solid piece of metal that would need a serious makeover to become Dane’s truck. The balance of the models were a combine trailer, dolly, 8230 CaseIH and a header trailer. Dane came back and ordered two more semis based on the other trucks in the fleet, 2-379 Petes pulling silver grain trailers. This tutorial will be comprehensive as I will explain the process to make a flat top 387, plus the steps to create the additional 379s.

To begin, I purchased two DCP 387s, one to mess up and one to get right. Luckily, I was satisfied with the results and only built one.

As seen in the photo, the original 387 in white is a solid piece of diecast metal. To make the cab a flat top the entire truck needed disassembled. The process to take the cab apart is relatively easy with an exacto knife and needle nose pliar. The plastic cab glass can be tricky depending on how much glue was used at the factory. The plastic inserts that have the Peterbilt emblem and air vent on the hood were tough to out in one piece. Patience is needed there. The rest of the plastic inserts came out with relative ease. Once apart, I drew a line just below the top window on the sleeper. I cut along the line with my band saw and trued up the cut edges with my stationary sander. 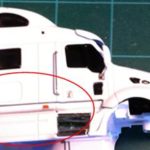 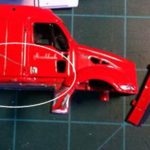 The fairings that attach to the back of the sleeper I took off and cut with a side cutter to the similar height as the cab and trued up on the sander. The fairings that contain the steps and would normally cover the fuel tanks needed to be removed as Dane’s truck did not have full fairings. I took my Dremel and cut along the bottom the flat piece of the diecast and the fairing. I cut all the way to the front edge of the steps, the cut from the bottom of the fairing up to the cut line at a slight angle. This process was used on both driver and passenger side. I cleaned up all cut edges on the stationary sander and with a file.

When all the cutting and truing up of edges was complete I removed all the paint using house hold paint stripper. A warmbath in soapy hot water was all that was needed to for the next step. 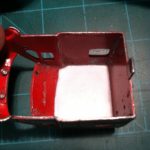 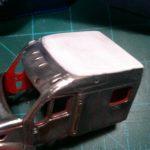 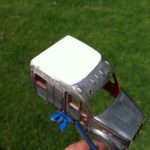 To cover the cut opening I made a piece of flat styrene was cut much bigger than the opening. A liberal amount of Maxi Cure Extra thick glue was used to attached the styrene to the diecast. Once the glue was dry, an exacto knife was used to cut the excess styrene away from cab. A piece of 400 grit sandpaper evened up the styrene to the diecast and rounded off the edges to give the new flat top a realistic look. The sanding took a good 45 minutes to an hour to get right. Work to blend the styrene and diecast edges so no seems are a seen. More glue can be used to fill in bad seems then sanded down again. 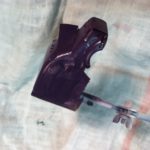 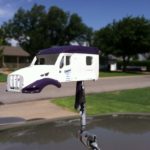 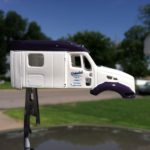 When all the joints are seamless and the cab looks good dry fit together, it is time to prep and paint.I like to wipe all the parts down with lacquer thinner liberally. Two coats of self etching primer then several coats of white finished off the base paint. The front fenders and the top of the cab are purple (after my alma mater Kansas State University of course). Using painters masking tape both fenders and cab top were masked off. In addition, there is a bit of the fairing left on the second piece that makes up the cab, this too was masked off for several coats of purple. Since this build was different than what I am used to I employed a new idea. When the masking tape came off and the paint looked good the decals were put on. When set two coats of clear went on over the all the painted parts. This will ensure that the decals do not come off…ever.

Reassembly went pretty smooth. I did manage to muck up a couple parts during disassembly. Luckily I had a second cab to rob parts off and all went well .Two plastic parts on the passenger side were not the best going back on and look poor but the second set of parts I salvage from the second cab were lost when I took them off. Those lousy parts popped off and were lost into the abyss I call my workshop. I heard them hit something and a long search yielded nothing but dust. Thus the original was used. The exhaust needed to be shorted up a bit which was accomplished by cutting the pipe at the base of the muffler and drilling a hole slightly bigger than the pipe and reinserting what I cut off until it was just above the sleeper. A heavy duty front bumper off of a DCP Kenworth was installed by gluing it to the lower part of the front grill. It did not match wrap around like the bumper on the real truck but is the best match I could find. There were two spot light on the new bumper I cut off with a small side cutter. An oversized load sign finished off the build. This truck come with antennas that attach to the side. Those were left in the original sack with an extra set of mirrors standard with all DCP trucks. 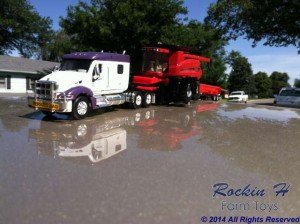 A set of steps on both sides of the truck were needed to make it look just like Dane’s. I had several of these steps in my leftover parts bin and sanded them down to fit between the fuel barrel and front fairing. They worked slick and glued on with ease. A paint pen was used to color the cab lights on top of the cab.

To create the two purple and white 379 Peterbilts in the Dolechek Harvesting crew, I bought two purple and white heavy haul Petes that were released 4 years ago. The cab and hood were correct but the frame length and color were wrong. One option was to shorten the frame, remove one axle, then paint the frame black to match. Or, buy two more Petes with the correct frame and swap parts. Notice the difference in the frame length and style between the truck on the top and the truck on the bottom of the pic. 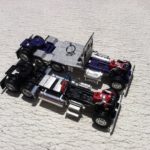 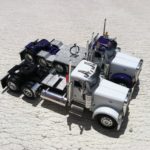 Switching out the hood and the cab was a simple process. Two hoods pins need to be removed to take off the hood. A simple screw holds the cab on the frame. There is a plastic air tube that attaches to the cab and the engine. This part can be gently pried up from the engine before the cab will come off clean.

Reassembly is the reverse process with two additional steps to keep it simple. 1– Take a round file and ream out the holes where the hood pins go through. 2– to attach the hood pins, set a pin in the mounting hole and squeeze in with a needle nose pliar. 3– If the air tube came off the engine clean and is still mounted to the fire wall of the cab, cut off the stub that inserts into the a joining hole on the engine. The final details for the two trucks included heavy duty bumpers just like the 387. Two spot lights that were mounted on the bumper were cut off. The bumpers came off a Kenworth W900L and did not fit perfect on the trucks. Therefore the new bumper was mounted over the existing bumper for a better fit. Not the cleanest look but it fit much better. Dolechek decals were added to complete the build. 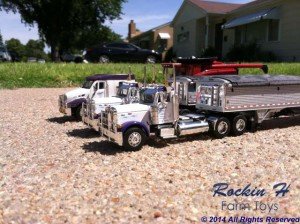 If you have any questions about this build, please post comments in the comment box. Thanks for reading and I will see you next time.