Another great build and a new challenge. I ran into Rob at the US Custom Harvesters convention and he asked about a rebuild of a KW T660 he had created. Eager to make a Frederick Harvesting model I said heck yeah! While I waited for Rob to send me his truck I went online and bought a practice truck. The build started with a Johnny Lightening T660 made by Speccast.

To disassemble the truck was pretty straight forward. No surprises and not too many parts. Most came off with ease and surprisingly, I did not break any as they came off… whew! House paint stripper cleaned off the paint with a nice bath in hot soapy water to remove any leftovers. I did use a wire wheel on a couple stubborn spots. 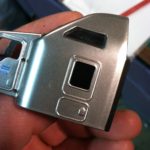 To chop the sleeper I drew a line below the top window on the sleeper and made the cut with my band saw. The cut edge was cleaned up and leveled with my stationary disk sander. The opening was covered with an oversized piece of flat styrene. Once a copious amount of glue was dry I cut the excess off with my exacto knife. The front edge of the styrene had a noticeable seem that needed filling. Using Testors model glue I ran a bead along the front edge. Once dry I used a sanding disk in my variable speed Dremel to clean up and blend the edges to remove any noticeable seems. I had to run a second bead of glue as the edges were not as clean as I like. 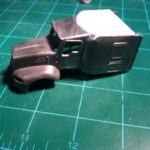 At this point I was happy how the truck I bought was progressing.

When Rob’s truck arrived I went ahead and dismantled it and began reworking it at the same time. A good wipe down with lacquer thinner and self etching primer went on. Kenworth Medium Blue metallic was a challenge to find. With Rob’s approval we settled on a version of Medium Blue Metallic by Duplicolor. It is still a bit too blue compared to the real trucks, perhaps in time I will get a better color. There is a Ford color that looks closer but…. 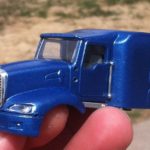 Reassembly went well. A DCP (DieCast Promotions) frame was used versus the factory frame. The real truck has duals, the original frame came with super singles. Not good enough. Plus the DCP frames are nicer all the way around with better wheels and tires. Plus these frames match DCP trailers perfectly. The chosen frame came from a DCP Freightliner Century I bought to salvage the frame. The take off parts were sold off.

The parts reattached well. By taking time to remove them without breaking important parts they went on slick. 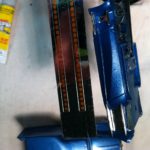 The fairing that houses the fuel tanks and attaches to the frame had chrome pieces on the real truck. In my decal stash I found some lights by Nomax Custom Trucks that had just enough chrome that I could cut small pieces to fit between the steps below the doors and leading up behind the sleeper. I admit this was a super tedious job and require a taste of super glue in spots to keep them on. This was a great project for a favorite custom cutting outfit right here in my home state.

Post questions in the comment box and keep the conversation going. Please share on Facebook and your favorite social media sites. My goal is to help people make models their family will fight over when they are gone.