Rockin H had a great year with interesting builds that had never been completed in the lab. One of the more complex jobs was a series of trucks commissioned by the drivers of Frederick Harvesting. This included T660, T600, T800 Daycabs, and T800 38″ sleeper trucks (15 trucks to be exact). To this point I have not created a T800 sleeper truck using anything but resin cabs. Loving a challenge I jumped at the chance to try something new….and….create rigs for Frederick Harvesting. I have been secretly hoping one of the guys would order a cab just to have an opportunity to work for them.

To begin, I wanted to use a diecast base as I like the diecast over resin when it is available. The T800 started out as a Tonkin T800 Dump truck purchased for $50. It may seem sick but I bought the whole truck only wanting the cab. The dump bodies were sold off on ebay and privately for $25. This made the cab $25 more or less. Not bad considering a resin T800 cab plus a 38″ sleeper would have cost about $31 plus shipping.

Next, I purchased DCP Kenworth Day cab trucks for 35 to 45 each for the frame. These particular cabs have shorter frames and had the correct fuel tanks and steps to go with the new cabs. These trucks were stripped to the frame. A portion of the parts were kept for future builds, the cabs and hoods were sold off for $15 +/-.

The T800 cabs were stripped of all parts and paint. I took great care not to lose parts by disassembling the cabs over a dark cloth to see parts I may have dropped. In the whole process of stripping these cabs I only broke two air horns, a monumental win! And, I did not lose any parts, another big win as no replacement parts exists for this particular brand of truck. If any parts are lost or broken the replacements have to be salvaged from like cabs. I bought a few extra T800s just for the this purpose.

I purchased resin 38″ sleepers from Truckin Little and Stamp N Toys to marry to the diecast cab. The sleepers did not fit as well as I had hoped and needed special care to assemble. Several spacers were used between the cab and sleeper to give a firm place to glue and to ensure the sleeper fit square on the cab. I used a generous amount of glue to bond all the parts.

The sleeper is too wide for the cab and had a pretty wide gap. Approximately 1/16″+, existed and needed to be filled in. Using Bondo body paste, all gaps around the sleeper and cab were filled in, allowed to dry, and sanded. I used 240 grit sand paper. I reapplied paste where lines existed and sanded again on most of the cabs.

A coat of self etching primer was sprayed on when the sanding was completed. I wiped down the whole model with lacquer thinner on a rag before priming. Once the primer was applied a few strange lines appeared I had not seen before. More paste was added, then sanded where ever needed and primed once more.

A failed attempt at matching the paint for these trucks led me to Jeremy’s Paint and Body in Sterling Kansas. This is the company that paints the real Frederick trucks and mixes the color for those trucks just for Frederick. A phone call yielded just enough of the Frederick paint to give all the models the correct color. It also required I learn how to thin and apply mixed paint. To this point I had only used rattle cans. See my evaluation of the Preval Spray Gun. This tool worked great for applying this paint. Each cab was sprayed 3 times with paint.

For this project I tried something new with decals. Normally paint and clear coat are applied then decals. This time around the paint was applied, then the decals, then two coats of clear. This worked much better than I expected. Applying decals in this order did two things. One, it made some of the edges on the decal less noticeable. Not that it is a problem, but it does look more professional applying decals then clear. Two, the decals will never come off. It can happen with water slide decals that over time they will peal off. Especially of no softener like Micro Set is used. The clear coat also made the decals pop out a bit more. Very nice.

To mount the cab to the frame, shims were used to make the cab level, then generous amounts of glue were used to bond all the parts together. The salvaged steps from the DCP Kenworth and the fuel tanks from the salvaged T800 frames were reattached. Salvaged airlines and tool boxes were added to the cabs that needed them. A couple of the cabs had quarter fenders and other had half fenders. The quarter fenders were simple as some of the DCP frames had them so no action was taken.

The half fenders were another win. Some of the DCP Kenworth frames came with full fenders. By removing them without breaking them, I cut the fenders in half, made sure they were square and reattached them in the existing mounting holes. That made this step super convenient.

The trucks exceeded my expectations and turned out very nice. They were super fun to build and even more fun to deliver. 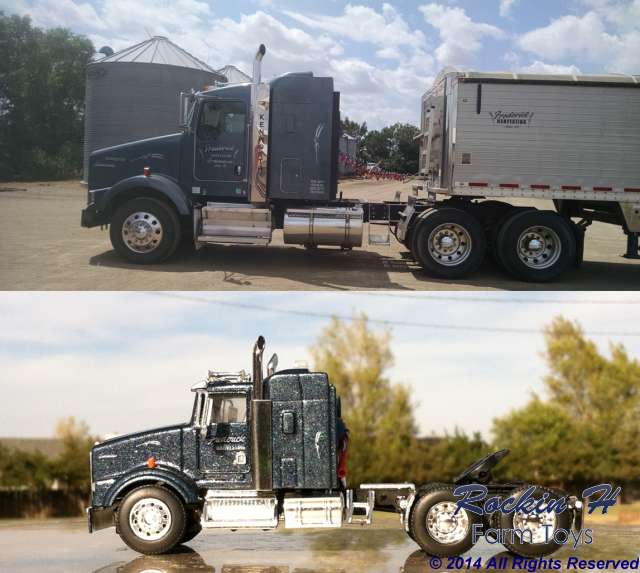 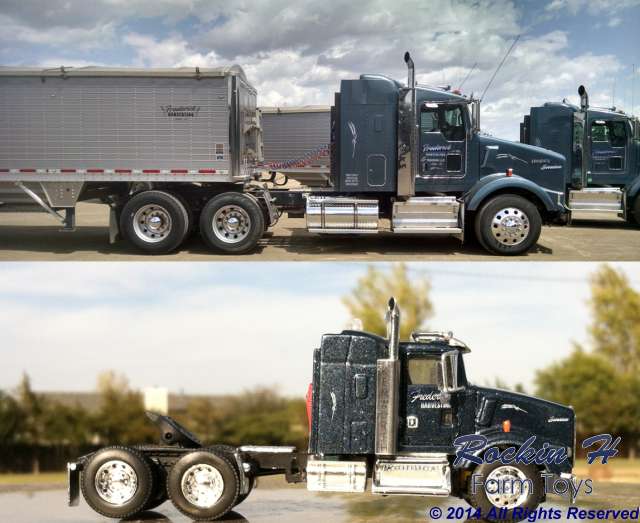 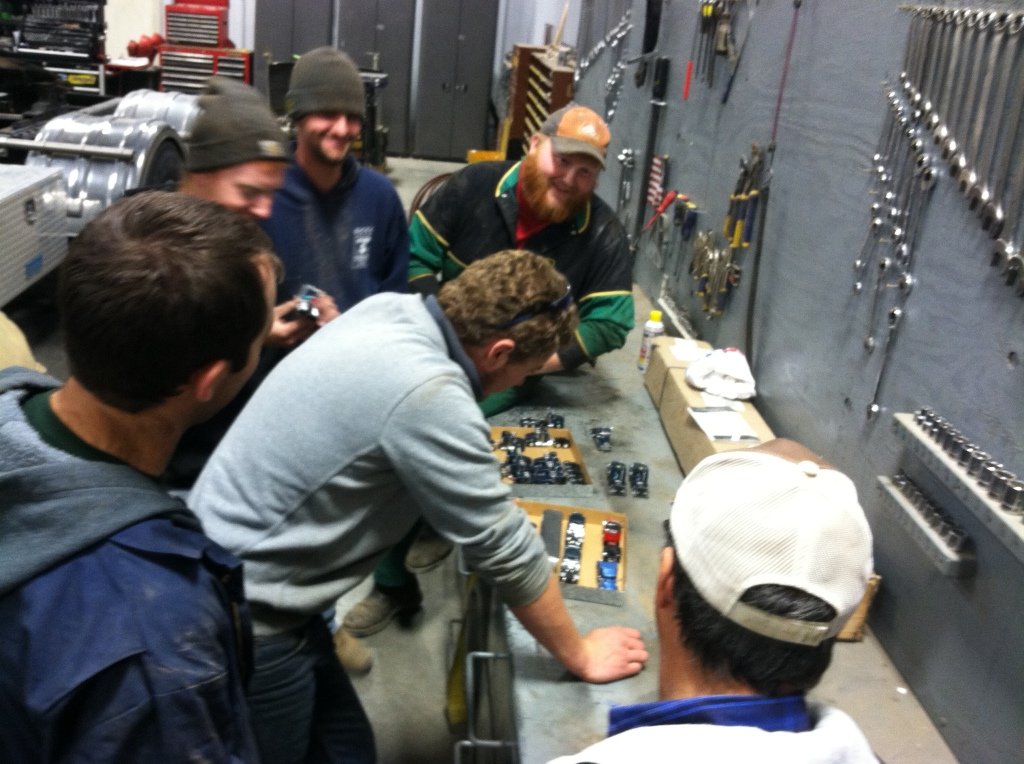 Playing with their new models.